LiveArt has access to dozens of different works by Alex Katz through our network of listings and the Trading Floor. If you are interested in discussing your—or your clients' needs—please contact us here.

Alex Katz: Gathering, the survey of the artist’s career from the subway drawings to the massive canvases capturing light dancing on trees and every slick and shiny variation the 95-year-old painter conceived of in between (including the fascinating and compelling collages he made in the 1950s), cannot and should not be reduced to its effect on Katz’s market.

Nevertheless, the placement of Blue Umbrella 2 from 1972 at the base of the Guggenheim’s rotunda is a subtle reminder to the market-minded that Katz, who has been sometimes dismissed because of his too-pretty subject matter, has previously struggled to develop a strong secondary market. On the face of it, that seems odd, almost frustrating.

The sale of Blue Umbrella No. 2 tried to jump start the artist’s secondary market 21 years ago when, in a November Evening sale at Christie’s, it set a record for Katz at $666,000. Another 18 years would pass before someone paid substantially more for a Katz painting.

Katz’s work first broke a million dollars in 2019 just before the Guggenheim announced this retrospective. In 2019, six paintings were sold for $1 million or more, including the smaller version of Blue Umbrella I also from 1972 which made his current record price of $4.1 million.

Since then, another four paintings have been auctioned for more than $1 million, including two this Spring that sold for more than $2 million. Another three Katz paintings from the 80s are coming up this month. Parrot Jungle from 1985 has a $1.8 million estimate at Sotheby’s; The Grey Dresses from 1982 has a $1.2 million estimate at Phillips; and Eric and Anni from 1983 also estimated at $1.2 million.

In many ways, the public market is catching up with the private market for Katz’s work. One double portrait from the 1970s featured in the Guggenheim show was sold at Art Basel in Miami more than half a decade ago for more than $2 million. This was when other similar but not quite as accomplished double portraits from that era were selling for $605,000 at auction.

Katz’s work might get dismissed because of its surface appeal and sunny depictions of its subjects in just the same way that his market value seems to get under-appreciated due to the lack of headline numbers. And when those numbers have come in the last two years, they haven’t been achieved after sustained bidding wars far above the estimates (except for the sale of Blue Umbrella I.) This month we’ll see if those gains are sustainable. But it always helps to look at the path that got us here. That doesn’t mean works from other eras in Katz’s career are not becoming more valuable too. This chart shows that the 1980s works (colored in gold), once valued around $200k are now priced anywhere from $400k to $1m. These works are stylistically the most similar to the ones from the 1970s. Katz kept a great deal of his early work. (You can see that from the Guggenheim show.) But work from the 2000s (here seen above in green) is plentiful on the market. A decade ago, that work was valued between $200k and $400k Today it can auction anywhere from $100k to $1m depending on the image. You can also see on these charts that fewer works from the 1990s are being sold at auction these days. During the first decade of the 21st Century, those works were fairly plentiful on the market. You can also see that more works from the 1950s and 1960s have come to market and sold well in the past half decade.

All of this is to say that Katz’s market has become spread across a broader price spectrum and there are price points developing for work by decade of creation and likely size and image quality as well. 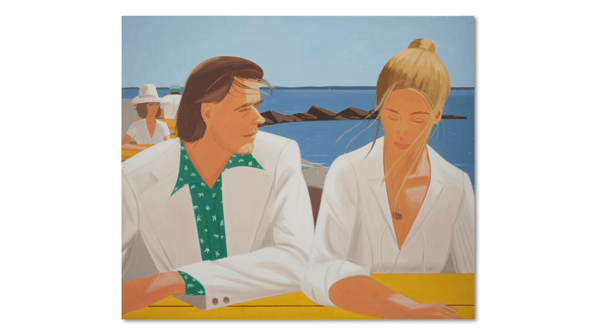 Sotheby's Bets on a Katz Breakout

It’s a big auction season for the most famous names and for emerging talent. But there’s also a...

The market theme of the Autumn of 2022 is an expected repricing of art in the context of a new...

One of the surprise successes of the Macklowe collection was the performance of one of Roy...