In a season crowded with works by the AbEx giant, a late 70s landscape work will be offered in November.
Marion Maneker 04 October, 2022 2 min read

In a season already crowded with a significant number of works by Willem de Kooning, including three works from the artist’s estate and a rare early collage from 1950, Christie’s has announced for their November 17th Evening sale a 1970s landscape work with expectations of making $35 million or more.

Willem de Kooning’s most important work from the 1950s has either traded in the private market for nine-figure sums or is in museums. But there is a body of work from the 1970s that both reflects a renaissance for the then septuagenarian painter and the bulk of the top of his auction market. Seven of the top 12 prices paid at auction for de Kooning works were made by works painted in 1977.

So it is significant that Christie’s is offering a work, Untitled III, started in the special year of 1977 and finished by 1980, that it expects to join those top prices, especially the top three spots. de Kooning’s most valuable work at auction was one of the seminal Woman paintings from the 1950s that sold for $68.9 million in 2018. Just slightly behind that work is Untitled XXV from 1977 that made $66.3 million at auction at Christie’s in 2016.

Another 1977 painting in the same size as Untitled III, was sold in 2013 for $32 million also at Christie’s. A lot has happened in the nine years since Untitled VIII made that impressive number which suggests Christie’s expectations are not out of line.

When too much work by one artist is on offer at the same time, it can have diametrically different outcomes. In some cases, more work generates more interest. Currently, Sotheby’s will have a competing work from the late 1970s that it is offering with a slightly lower estimate. The painting comes straight from the artist’s estate which should give it some added value. Like Untitled III from 1977-80 announced by Christie’s, the estate work has a blue palette. The estate work is a deep blue with yellow and white accents, a very different sort of work from the one at Christie’s which includes de Kooning’s signature pink tones, reds and hints of the earth tones that defined many of his paintings.

Estimates for the other works on offer by de Kooning are far lower than the two 1970s works. The one outlier is the collage work from the Solinger collection which is offered by Sotheby’s with an $18 million estimate. The work’s unique format as a collage, small size and the lack of comparable works at auction from the same period has left the auction house pricing the collage on the basis of 1949 work, Abstraction, sold in 2012.

“That was a managed white glove sale,” one of Christie’s specialists said to her colleague as...

Christie's has $6m Georgia O'Keeffe for May

Georgia O’Keeffe’s A Sunflower from Maggie (1937) will be a highlight of Christie’s... 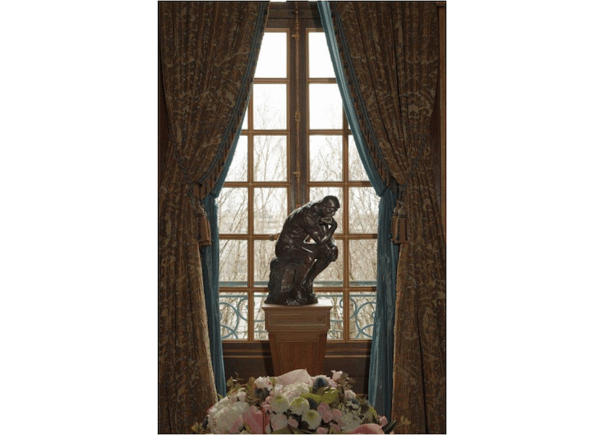 Christie's has announced the sale of a 1928 cast of Auguste Rodin’s “The Thinker” which is the...