Solinger strategy: Laura Paulson, the Gagosian art advisor and veteran of both Sotheby’s and Christie’s, presided over the naked (there was no global guarantee or irrevocable bids) sale of David Solinger’s collection from a skybox at Sotheby’s. Solinger was deeply connected with artists and collectors of his postwar generation. His collection showed that with numerous works from now-obscure-but-then-important artists. That may help explain the strategy. By trusting in the market appeal of the best works and allowing Sotheby’s to structure the day sales accordingly, Paulson seems to have understood that two-thirds of the sale’s value would come from the 10 works collectors competed for.

Awkward bidding: Paulson also seems to have accepted low reserves on the lots which helped sell out the collection but seemingly added one unintended consequence. Auctioneer Oliver Barker started many of the lots quite low which created choppy and uneven bidding. This was most evident on the sale of Solinger’s large Joan Miró painted at the end of World War 2. Dealer Chris Eykyn eventually pushed market backstop David Nahmad to a price just above the low estimate. But that lackluster result took sustained and prolonged bidding.

A cheap Picasso: Solinger’s Picasso depicting Marie-Thérèse Walter was sacrificed for a $9.9 million price that represented a little more than half the low estimate. The dark painting, one private dealer suggested, might have been better sold privately which means the buyer got a good deal.

De Kooning Delivers: One of the high points of the sale was the strong bidding on Willem de Kooning’s Collage from 1950. Estimated at $18 million which signaled high expectations for a small work on paper, the work sold for $33.6 million. That sets the table nicely for the three works from the de Kooning estate being sold later in the week and the several other de Kooning works appearing around town which now seem like great opportunities.

Three men and a patina: Sollinger’s Giacometti Trois hommes qui marchent (grand plateau) sold for $30 million after sustained bidding by Jeffrey Deitch. The painted example of the work triggered interest beyond the $17 million paid for an example from the 1948 cast sold two years earlier and the $17 million paid 11 years ago for another. The sale came on the same day that the Giacometti foundation announced plans for a major new museum in Paris that will open in 2026. The artist’s stature and legacy are being well-guarded which bodes well for long-term value.

Solinger Successes: A smaller Miró offered at the end of the sale, Jean Arp’s distinctive red stone Bad Fruit that opened the sale, a 1954 Pierre Soulages, a black Calder and a dark 1948 Dubuffet all sold well. Of Solinger’s three Dubuffet’s Sotheby’s had high hopes for the 1967 L’Hourloupe work which failed to take off. The two lower-priced, earlier works saw strong bidding. The Dubuffet market has been active for several years with most buyers satisfied. The weak Euro also can’t help the cause very much.


Modern doubt: The organizing principle behind these sales isn’t helping them succeed. Sotheby’s had previously taken the lead to renovate the Modern category by incorporating works from Latin American and American sales into the Modern sales. In this sale, that strategy proved more of an encumbrance. Works by Joaquín Torres-Garcia, Norman Rockwell and Bernard Boutet de Monvel all failed or were withdrawn.

Paley clout: Bill Paley was once the definition of the establishment but his name isn’t quite the incantation it once was. Nevertheless, his 1919 Picasso was the second highest lot of evening. The $47 million sale underscores the importance of collectors and provenance in this category.

Bidder’s came out: There was strong bidding on only four lots. The opening lot set a new record for Elaine de Kooning at $1.07 million. Andrew Wyeth’s The Wake from 1964 made a solid $4.6 million. Paley’s Pierre Bonnard still life from 1939 sold for $4.6 million, too, which seemed to take its cues from the Bonnard in the Allen sale. A Thomas Hart Benton set a strong $4.89 million price just below the $5.5 million record set last week but it sold for the low estimate. Tamara de Lempicka’s portrait of Romana de la Salle also set the second highest price for the artist at $14.1 million.

A supply drought: The challenge for the Modern market is when artists cease to trade frequently. Dwindling supply begets fewer collectors which reduces demand and competition. Bonnard prices over the last week demonstrate that. Sales of work by Paul Klee also show the effect as well. Ten Klees were offered in six days. They all sold but not without work. Filling these sales also seems to have motivated Sotheby’s to offer some works that raised some eyebrows. For example, there was a posthumous Brancusi and two Schieles (one sold and one that did not even though it had previously been sold at Christie's a dozen years ago) that seemed to be reaches.

Asia about: Perhaps to help build confidence in the category, Sotheby’s was eager to point to Asian buyers in the various owner’s sale. The $51 million Mondrian that sold to the guarantor was the most prominent lot. A black Calder that sold for $8.5 million, the small Miró at the end of the Solinger sale and Paley’s Rodin bronzes all went to Asian buyers. Sotheby’s says Asian underbidders were chasing the de Lempicka, Wyeth, Picasso and Chagall.

The Nahmads eke out: The Nahmads were more active at Sotheby’s in these sales than they seem to have been recently.  That suggests the Modern market is turning toward opportunistic long-term buyers. This isn’t necessarily a bad thing. The art market works in cycles that often span three years. Seller expectations rise with the market until estimates become off-putting. This dynamic tends to be more pronounced in the Modern market. Bidders were cautious at Sotheby’s and had to be pushed. On one lot, the Nahmads threw in a late $50,000 bid that forced the buyer to pay an additional $100,000 on the hammer price. 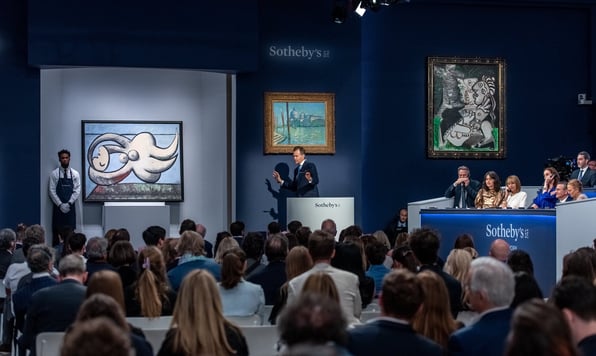